Driving Without Insurance: What Does Proposition 213 Mean for My Case? 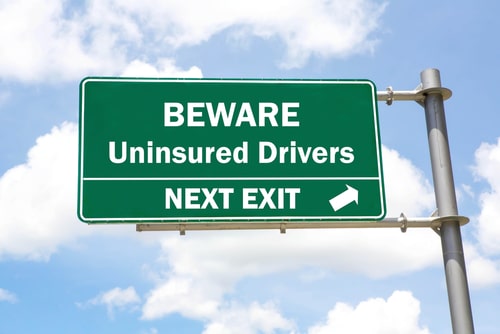 In 1996, California voters passed Proposition 213, also known as the Personal Responsibility Act of 1996. Prop 213 is extremely relevant to personal injury law in the state of California, as it limits the ability of some drivers to collect certain types of damages after an accident.

How will Prop 213 affect your case? If you are a California driver, this is something you should know, and so in this article we will explain how the law works.

In a nutshell, the two main types of damages are:

Prop 213 penalizes drivers who are not at fault for the accident by preventing them from collecting noneconomic (or general) damages. If you were involved an accident which was not your fault and you were not insured at the time of the accident, you will be able to get all your accident out-of-pocket expenses paid (these expenses include things such as car repairs, tow bills, rental bill, and your medical bills). But you will not be able to collect for pain and suffering. Proposition 213 applies in the following circumstances:

All drivers in California are required to have auto insurance by state law, but it is estimated by the Insurance Information Institute that around 15.2% of California drivers are uninsured.

There are a variety of reasons why drivers may not fulfill their legal obligation to drive with insurance. Much of the time, the reason centers around financial insecurity. The driver simply cannot afford auto insurance.

Other times, however, the driver’s insurance may lapse after a genuine mistake. We have seen many instances when people forget to make their premium payments on time and let their coverage lapse or forget to let their insurance company know to add a new car that they just bought. Everyone makes mistakes, and I have seen many cases of this in my practice. And if you let your insurance lapse, then Prop 213 will apply to you.

When the people of California enacted this proposition, they did that because they believed that it would be inequitable for the uninsured driver to collect the full amount of their damages when they were uninsured. Imagine, if the roles were reverse? What if the uninsured driver was at fault? Then the other party would be uncompensated completely. The people of California passed this proposition in the hope that it would help encourage drivers to get their vehicles insured. They figured that the cost of premiums far outweighs the cost of medical care and injuries. These are some of the policies behind this proposition. There are a few other instances when this proposition applies. Please read on.

>The driver was drunk.

Proposition 213 precludes any driver from recovering noneconomic damages if they were in violation of California Vehicle Code 23152 or 23153, the sections of the vehicle code which prohibit drunk driving, and they were convicted of that offense.

This last line may sound trivial, but it is an important specification: the driver in question must have actually been convicted of driving drunk at the time of the accident.

After an accident, the police do not routinely test drivers for sobriety, but they will do so if they see signs of intoxication by one of the drivers. The police are pretty good at recognizing this, but they do make mistakes, and sometimes they may miss an intoxicated driver. If they do, then Prop 213 will not apply!

>The driver was in the process of committing a felony at the time of the accident, or was fleeing from having committed a felony.

This one is pretty self-explanatory. If you are injured in an accident while fleeing the police after having robbed a bank, you will not be able to collect noneconomic damages. (And you will have a lot of other things to worry about, too.) The idea behind this policy is that it would be inequitable to compensate such a person.

As is the case with the abovementioned provision concerning drunk driving, the driver must have been actually convicted of the felony in question for Prop 213 to take effect.

Those, at least, are the basics of Prop 213. But there are still a few points to keep in mind:

Proposition 213 was passed for a couple of reasons.

The first objective of Prop 213 was to decrease insurance costs for ordinary drivers on the road. Since most auto accident lawsuits involve recovering damages from auto insurance, rather than directly from the at-fault driver, and since the purpose of auto insurance is to pool risk, this means that ordinary drivers on the road end up bearing the costs of accident damages through increased premiums.

However, there is a reason why uninsured, drunk, and criminal drivers were targeted, rather than simply disallowing all drivers to collect noneconomic damages altogether (which would, in theory, decrease premiums even further).

And that is the second objective of Prop 213: to punish irresponsible drivers.

The basic logic behind the law is that ordinary drivers should not be expected to pay for other drivers who do not respect the laws regarding intoxicated driving and insurance. But while few people would disagree that responsibility is important, the law can sometimes come down awfully hard on drivers who miss an insurance payment or cannot afford insurance.

Unfortunately for you if you were a driver who let your insurance lapse, Prop 213 can be enforced rather harshly and mercilessly. In fact, it will be enforced even if you reasonably believed that the vehicle you were driving was insured.

How Can a Driver Avoid Suffering Because of Prop 213?

Avoiding the first two parts of Prop 213 are easy for any law-abiding citizen. Don’t commit any felonies while driving, and don’t drive drunk or drugged.

Avoiding the third part of Prop 213 can be a little less straightforward. There are a number of reasons why a driver’s insurance might lapse, and not all of them imply a moral deficiency on the part of the driver. Some are simply procedural mistakes.

For instance, if you failed to pay your insurance premium, or if you paid it late, or if you did not renew your insurance, then this could lead to a lapse, and if an accident happens during this period of lapse, Prop 213 will apply to you with all its force.

Letting your insurance lapse is dangerous for other reasons, too. If you are involved in an at-fault accident (and this can happen to anyone, even a perfectly good driver), then you will be fully and directly financially liable for any damages you cause.

For all these reasons, we can make only one real recommendation here: be very, very careful to pay your insurance on time. If possible, set up an automatic payment plan and make sure your payment method and mailing address are up to date. And, if you become aware of a lapse, make sure to resolve matters as soon as possible.

If you have been injured in an accident, don’t delay, contact the Law Offices of Jennie Levin, P.C. right away. We will do all that we can to help you. Also, if you found this article interesting and you believe that your friends would be interested in learning more about this, then share on Facebook, Twitter, and other social media. Finally, feel free to leave us a comment, and let us know what questions you would like us to answer next